Dr. Vicki M. Johnson didn’t set out to break any barriers or shatter any glass ceilings when she returned to her alma mater to teach in 1979. “I never really thought about it,” she said. She came to teach business education, which she did, including typewriting, shorthand, and office management. Returning to her alma mater as a member of the faculty was, she says, “fulfilling a dream.” She counts working with two of her mentors, Wynelle Hiten and Dr. J. Walker Whittle, as highlights of her teaching career.

Eventually, shorthand dropped out of the picture and typewriting became word processing and then business computer applications. Along the way, she also taught business communication, records management and office management. Business communication, a junior-level writing class, was her favorite. “Students didn’t look forward to it,” she said, “because they didn’t like to write. Yet, it was usually listed as one of the top three courses, no matter what their major was, for preparing them for their job.”

“It was my favorite because I could see improvement in their skills.  They did not care for the course, thought I was too strict, and often didn’t practice what they had been taught,” Johnson said, “but many of those same students have since told me how helpful it has been in their jobs.”

As a grammarian, she admits some errors give her grief: writing incomplete sentences, using numbers incorrectly, or, heaven forbid, forsaking the Oxford comma.

In 1992, Johnson made her first foray into administration when she became the assistant dean of the School of Business. She served in that position until 2009 when she began a 10-year stint as the associate vice president of academics and the highest ranking female in FHU administration.

Over that decade, she thought maybe twice about her status in administration, she said. While attending an FHU basketball game, a school employee came to her, noted she was “the highest ranking official” at the game and asked her about a particular situation. “I am being honest when I say that I had never thought of myself in those terms,” she said. “And the funny thing was I knew nothing about the situation I was being asked about.”

The second time, she says, was one day when she was thinking about the school’s past and how it has changed over the years. She commented, “Being the highest ranking female has not controlled my thoughts. I have not thought in terms of breaking barriers.”

The role of women at FHU has changed significantly since Johnson’s days as a student. For many years, the only woman in an academic leadership position was Daphene Kennedy who chaired a department. Today, three of the five college deans are female. Johnson credits former president Joe Wiley with increasing the number of women in administration. He, in fact, appointed Johnson to her current role.

Now that she is retiring from university life, Johnson is making plans for the future: volunteer and church work, spending time with her sister whose health is failing, traveling, and reading, lots and lots of reading. “Books are my weakness,” she said. “I probably have 200 books in my house that I haven’t read yet.”

But, reading will likely take a back seat when the Tennessee Vols are playing. Once a season ticket holder for Vol football games, she no longer sees many football games in person. “No one sits at a football game any more,” she said, “and my knees won’t let me stand.” So, she purchased a 65-inch television and when game time comes, “I get in my recliner and I have the best seat in the house!” she said.

Games and books and travel can all be forsaken for Heidi, a 13-year old black and tan miniature dachshund. Heidi has recently developed diabetes and requires insulin shots, so Johnson has adapted to her schedule, even missing Lady Lion basketball games, to give her the shot at the appropriate time. No doubt about it, Heidi is the highest-ranking female in the Johnson household. 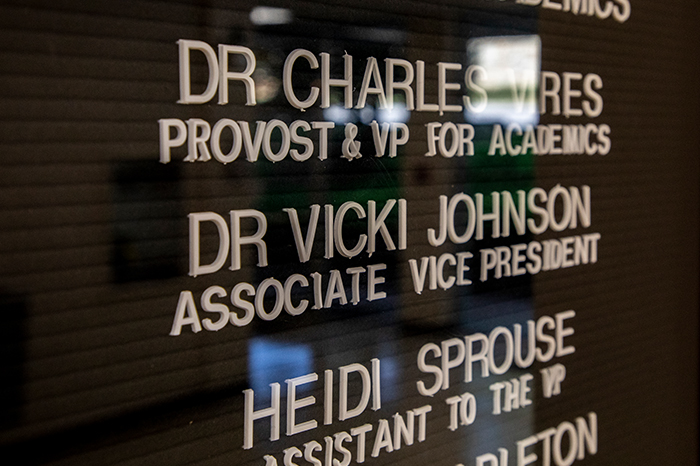 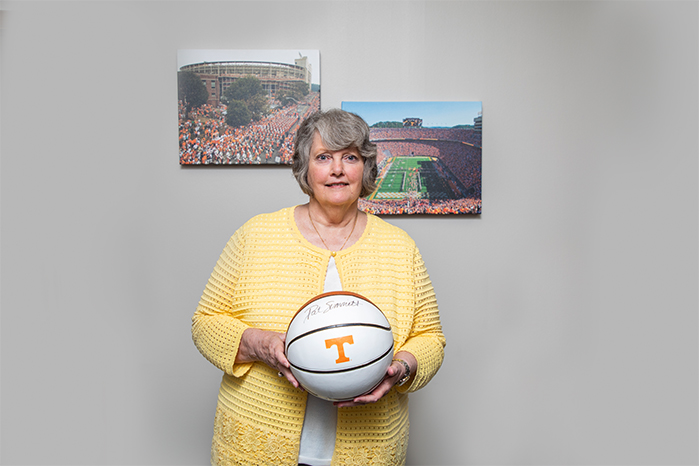